It’s been quite a while since I updated this blog; and so naturally, this will be my longest entry to date. Between all the travel preparations, supervising our brand-new 5.1 mix (courtesy of the great Phil Hegel), mastering the HDCAM tapes for the festivals, and sales strategy meetings with our producing team, let’s just say that I was a little short on time.

Since I mentioned the word “sales”, I might as well tell you (in case you haven’t heard) that our deal with The Salt Company was announced in the trades a few days ago:

This means we’re moving forward with worldwide distribution plans, which we’ll be announcing in the next few months. This is obviously terrific news for the film, and I can assure you that we’re working on innovative ways to make PvG available around the world, along with a healthy dose of the 600+ hours of additional footage that didn’t make the final cut. The site of the massive opening night party at EIFF.

In the interim, I had to skip an amazing two-day filmmaker retreat at Skywalker Ranch (all feature filmmakers selected by the Los Angeles Film Festival were invited) to attend the 64th Edinburgh International Film Festival–the oldest continuously running film festival in the world, and one of the gems on the international circuit. This was the site of our European premiere; and after two packed and lively screenings at Filmhouse 1, and two industry and press screenings, we were named Best of the Fest, and had an encore screening on Sunday, June 27th.

This was my first time in Scotland, and I was joined there by our UK producers Anna Higgs and Gavin Humphries–not to mention that my parents crossed the pond to watch the film for the first time. I don’t think they quite understood what Midi-chlorians or the Han Solo/Greedo debate were all about (they’re not fluent English speakers); but they were proud, nonetheless, and that was good enough for me. While I couldn’t quite make it to the opening night screening of Sylvain Chomet’s new film, THE ILLUSIONIST, I was able to attend the massive opening night party; and as I walked down the red carpet, the bagpipe player switched her tune to the SW theme. Coincidence..? Man, do I wish I had my camera handy..! I must say, John Williams’ music sounds even weirder through a bagpipe than an accordion. Those of you who have seen our film know exactly what I’m talking about.

Okay, so the bagpipe player didn't quite look like that, but you get the picture...

Food was probably the low point of this particular leg of the trip. If you don’t like haggis or fish and chips, you’re basically screwed. I had fish and chips twice, and haggis three times. It gets old. The Ceilidh (pronounced “kayleigh”) was definitely the highlight of the festival for me. Sean Connery was there, and so was Patrick Stewart. The Scottish music and dancing were really wonderful. My one regret is that I didn’t have much time to visit this absolutely gorgeous city. Too many interviews. I mean, come on, they booked 7 in a row on day two, followed by a documentary panel, screening and Q&A!

Our first rooftop party at LAFF.

All things considered, Scotland was truly wonderful, and I hope to visit again soon. I left Edinburgh on the 21st of June with a heavy heart, and flew to Los Angeles to catch our event screening at the Ford Amphitheater. Gosh, what a terrific festival! Robert and I had 20 productive pitch meetings (yes, we’re slowly getting ready to work on our next films), and great industry luncheons. We met a number of other filmmakers, but didn’t have a moment to watch their films. It’s the one thing that sucks about film festivals–there are always too many films I’d love to see, and never any time to watch them. The one event I wish I’d attended was the world premiere of ECLIPSE, during which 7,000 teenage fans apparently felt the urge to scream their heads off every time Edward, Bella, or that wolf boy on steroids (whose name escapes me) appeared on screen. I mean, NEW MOON was bad enough in a 400-seater. I must admit, that would have been a pretty badass way to experience the Twi-Hard phenomenon first hand. Alas, I had to be in DC that evening.

Cultural Anthropologist Daryl Frazetti & yours truly at the Ford.

Another huge crowd waiting for the movie to start.

The day before our official West Coast premiere, we were invited to show the film at Dreamworks in a private screening. After a brief tour of the campus, Robert and I hung out in the lobby during the projection, and spent some quality time admiring their gallery of beautifully framed Shrek and Kung Fu Panda original artwork, and trophy cases (including, of course, a couple of Oscars). It was a lively Q&A after the credits rolled, as it turned out that many people in the audience had actually worked with Lucas at some point in their career; and they were all very complimentary.

One of the trophy cases at Dreamworks Animation.

The screening at the Ford was an experience I won’t soon forget. More than 800 people showed up to see the film on a giant screen under the stars. Almost 30 of our interviewees and participants were in attendance (including Chris Strompolos, Nar Williams, Boo Friedmann, Anthony Slide, Jonathan London, Chris Gore, Paul Yates, John Venzon, Darth Bruticus, Daryl Frazetti, Charlie Unger, Brandon Kleyla, and the puppet geniuses of NearFar Studios), and I don’t think I ever saw such an amazing collection of rare and vintage Star Wars T-shirts on display. We went to the Formosa Cafe for our post-screening party, and reunited with many old friends. It’s always a strange feeling to reconnect with people whose faces you’ve watched time and time again in the editing room. For some reason, they always look a little different. A reminder, perhaps, that the screen ultimately lies to us, and that cinema–even documentary filmmaking–remains partially illusory.

With an early morning flight out of LAX, I barely slept an hour that night, and packed my bags again for our East Coast premiere at AFI/Discovery Channel SILVERDOCS. Another tightly programmed festival, and one of the best in North America. I did see one movie there–the strikingly original MARWENCOL, which also premiered at SXSW and has been following us on the festival circuit (or is it the other way around?), and won major awards at every stop. I wouldn’t be surprised if it got an Oscar nomination next year. A truly beautiful film.

The Q&A in full swing at the AFI Silver Theater.

Dale Pollock and I after the Q&A.

Battle Royale at the After Party!

The highlight of SILVERDOCS for me was watching the film on their most impressive stage–the AFI Silver Theater 1. I’d heard so many things about that theater that I built up sizable expectations in my mind; and let’s just say that I wasn’t disappointed. It literally takes your breath away when you first walk in. We were treated to two screenings there. The first one was immediately followed by a cool SW-themed party in the lobby (complete with lightsaber battles and an 8-bit DJ), and Dale Pollock joined us for the second one. He and I shared the stage for approximately 45 minutes. I asked him plenty of questions about SKYWALKING and his interviews with George, and he fired back with questions about the doc. SILVERDOCS filmed the Q&A with three cameras, so this will be a nice DVD/Blu-Ray special feature to add to the mix.

On the eve of our German premiere.

That night, we packed our bags again; and while Robert headed toward Niagara Falls for a long weekend, I went all the way to Munich for the German premiere of our film. Filmfest München is almost as large as the Berlinale; and as soon as I landed, I was treated to another round of great parties. I must say, this was definitely one of my favorite festival experiences. I was picked up from the airport by a driver I could have mistaken for a secret agent (tall, dark suit, tie, sunglasses). The car, of course, was the latest Audi A1–the festival’s main sponsor. I was assigned a personal host, who basically made sure I was constantly on the ‘go’ (whether I felt like it or not), took me to all the events, and made sure I drank plenty of alcohol (whether I liked it or not). Ina: if you’re reading this, I’m pulling your leg. 🙂

There was the traditional rafting trip, which they apparently do every year. Three hours on a log raft. I kid you not. Plenty of beer and liver cheese (which has no liver and no cheese in it) on board, and this was the perfect occasion to bond with other filmmakers, like Asiel Norton (REDLANDS), Jason Spingarn-Koff (LIFE 2.0), David Robert Mitchell (THE MYTH OF THE AMERICAN SLEEPOVER) and Matt McCormick (SOME DAYS ARE BETTER THAN OTHERS). Yes, I was there the day Germany trashed Argentina 4-0, and let’s just say that the town went a little nuts. The victory chants in the Munich subway are still reverberating in my head.

Bernd Dötzer, a faneditor featured in our film, missed the game, and instead drove 200km from Nuremberg to watch the film. He, like Jason Dee (who came all the way from London to attend our first Edinburgh screening just to see if his submission had made the final cut, which it did), and the good people of Leftfield Studios (who attended our East Coast premiere) made our film what it is; and their enthusiasm for our project is precisely what kept me going through these treacherous final months of post-production. So it’s extra special now to finally have the opportunity to share the film with them.

Here's the raft. And you thought I was kidding...

After three weeks of constant travel and very little sleep, I headed back to Denver on one of my worst ever flight experiences. Due to inclement weather, we had to circle above the city for an hour, and were eventually rerouted to Colorado Springs, because we didn’t have enough fuel to wait for our turn. Not enough fuel..? Are you kidding me?? But that proved to be only the beginning. Once in Colorado Springs, we waited 5 hours aboard the plane, with nothing but soft drinks and peanuts to keep us nourished and hydrated. The flight back to Denver was ultimately canceled, and so we had to deplane, wait two hours for a Greyhound bus to pick us up and drive us to DIA. From there, I took a cab home, and went straight to bed. Delta Airlines really blows..!

After an interminable wait, a professional cellist whips out his instrument, and plays Bach to lift up our spirits. The one and only highlight of an otherwise dreadful trip back home. 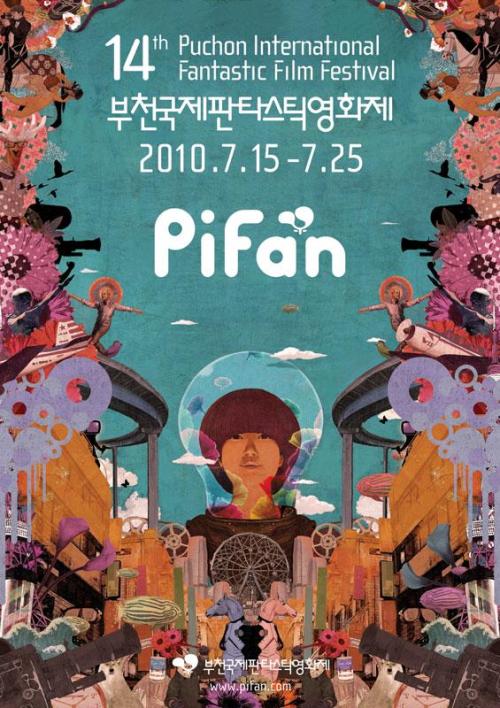 So I’m here for a whole week now, catching up on sleep; and Robert and I are getting ready to go to Korea for our Asian premiere. PIFAN was my very first festival experience, back in 2003, and it still ranks up there as one of my most memorable. It’s like a first love, really. So I can’t wait to go back, and write about it. And should North Korea misbehave… well… at least, we’ll have our camera..!

Until then, let’s cap this off with the usual list of links/reviews posted during our tour:

EIFF Best of the Fest