Back when the Sony Playstation 2 reigned as king of the consoles, Microsoft threw their hat into the ring with the Xbox. It wasn’t overly popular, but I bought one at launch, because their flagship title, a little game called Halo, looked like it might be pretty good.

But Halo wasn’t the only gem in the Xbox lineup. Computer game maker BioWare decided to come to the Xbox party with a game that was completely unlike anything I’d ever played on a console: Star Wars: Knights of the Old Republic. And it was only on Xbox and PC.

KOTOR is one of the best action RPGs ever. Period. I don’t care how much you hate Star Wars or Xbox, if you like RPGs, you like KOTOR. It’s better than whipped cream and chocolate sauce poured over a bowl full of rainbows. I’m known for not beating games, but I’ve beaten KOTOR at least three times.

Then you can imagine my elation when I heard about Star Wars: The Old Republic. It’s an MMORPG being developed by Bioware and is a sequel to KOTOR and KOTOR II (which really wasn’t as good as the original. Good try though, Obsidian.) I’m not a MMORPG fan, but I’ll get this one. The chance to be in an extremely expanded version of the KOTOR universe as a character that I completely made on my own? Yes, please!

The game features multiple races, classes, and sub-classes. How awesome is that? I already plan to be a Sith Inquisitor named Darth Tor’Que-mada. It seems appropriate. There will be numerous planets to visit that we all know and love from the movies. And for me, the best part is it takes place like 3,000 years before TPM. Meaning, ZERO references to the shitty prequels.

BioWare is known for making high quality games, especially RPGs. Their Mass Effect and Dragon Age franchises are both excellent and very popular. I have no doubts the TOR will be yet another sparkly diamond for them, if not the crown jewel itself. The game is slated for the second part of this year, and it seems to be on track.

My only issue is, in the trailers, they show Revan as a male. 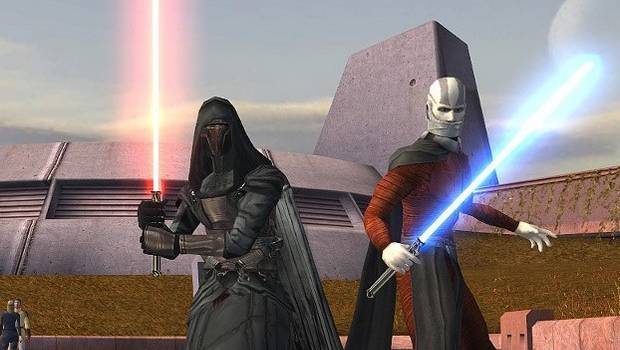 Stupid BioWare, Revan is a girl!

Or at least she was in my game. Speaking of which, I think I’m going to go dust off my old Xbox and relive some fond memories.

If you’re a KOTOR fan, tell us what your favorite part of the game was in the comments or on Facebook!