The redeye flight to Chicago was brutal. We landed at 4:40am, and basically had to stay up the entire day. We kicked off the proceedings with a brief early morning interview with Big John and Amy on AM 560 WIND, and headed to the convention center for a lunch interview with Elliott Serrano and Jose Melendez of RedEyeGeek (how appropriate). We shook hands with Neil Marshall (THE DESCENT, CENTURION) and his wife Axelle Carolyn–who will be on the jury with me at the Strasbourg European Fantastic Film Festival later this month–and since we had plenty of time to kill before our screening, we proceeded to indulgently roam the convention floor. There were definitely tempting toys galore (I’ve lately become a serious kaiju addict), but I’m proud to say I restrained myself (although I will live to regret a rare 9″ Japanese 1992 Godzilla meltdown figure), and instead chose to simply revel in the atmosphere of Wizard Con, which, I was told, has become one of the strongest challengers to the San Diego Comic-Con in recent years. 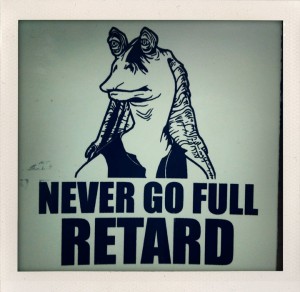 My favorite sticker at Wizard Con this year.

Jake Lloyd was on the floor (imagine young Anakin with a stubble–no, I’m not joking). The poor kid looked so unhappy to be there–unlike Richard LeParmentier (a.k.a Admiral Motti), who’s clearly an old pro at this. If my memory serves me well, their booths faced each other, and they were flanked by a bunch of retired Playboy bunnies, porn stars, and pro wrestlers. Adam West and William Shatner were there. Even Rod Blagojevich made an impromptu appearance to sign autographs for $100 a pop. I must admit, comic conventions never cease to amaze me. They’re not really about comics–more like the proverbial box of chocolates: you never know who you’re going to see. 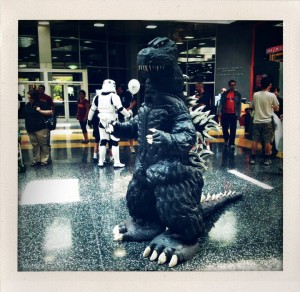 This guy must have a Mothra or two in his closet. 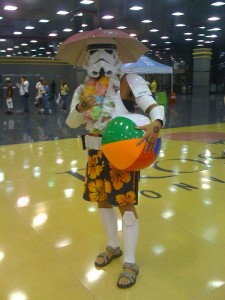 The screening itself was a blast. This was our first non-theatrical screening, and it was a refreshing experience. Convention ballrooms certainly aren’t as cool as, say, the Bloor Cinema in Toronto or The Paramount in Austin; but if you fill them up with hundreds of fanboys and fangirls, they somehow come to life in unexpected ways. The evening started with a George Lucas debate, moderated by Ain’t It Cool’s own Capone, and concluded with possibly our longest Q&A to date. Jason Seiler, the amazing creator of our official poster, came to see the film for the first time; and so did Michael Ramova, whose SW Grindhouse short (‘Don’t Go In The Endor Woods’) is featured in our film. We also had the pleasure of meeting Mike Stoklasa (a.k.a. Plinkett–creator of the wonderful SW Episode I-II reviews that were all the rage on YouTube a few months ago), who apparently drove a considerable distance just to see our film and say hi. Overall, the evening was ‘aces!’, as they say in England. 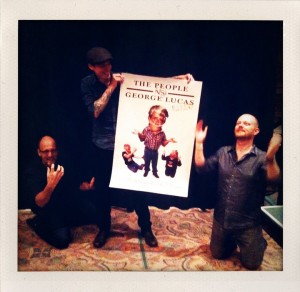 Recreating the PvG poster with artist Jason Seiler and the actual model used for his 'angry fan'. 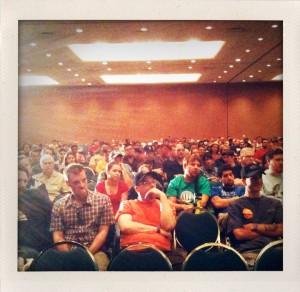 The Wizard Con audience during the Q&A. 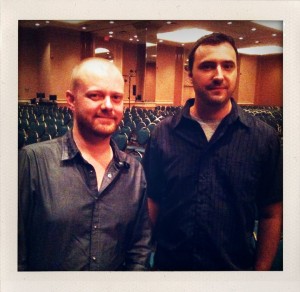 Mike Stoklasa (a.k.a. Plinkett), who drove all the way from Michigan to watch the film, came to say hi after the screening.

I caught another redeye flight to San Francisco the following day, and drove to Los Angeles in the middle of the night. Arrived at 10am absolutely destroyed, and slept most of the afternoon. After a few days in LA catching up with old friends and PvG participants, we capped our mini-tour with a killer screening at Kevin Smith’s own Smodcastle–easily the most awesome black box theater I’ve ever been to. It might be that I’m slightly biased, because Kevin Smith did show up to introduce and watch the film, and he was SUCH a gracious host! But let’s be honest here: do you know of another theater in LA where you’re welcome in your jammies on Saturday mornings to watch cartoons and eat cereal in the company of Kevin Smith?! I mean, seriously! 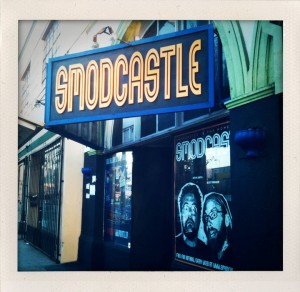 The site of the crime. 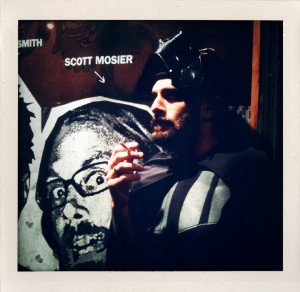 Darth Cohen, who made it all happen. 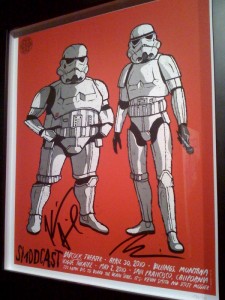 Several familiar faces showed up to the screening. Daryl Frazetti was there, and so were Hot Waffles. Without a shadow of a doubt, the highlight of the evening was their live acoustic performance of ‘George Lucas Raped Our Childhood’, with a little comedy number by Kevin. Our good friend Matt Walsh shot the performance for us (along with the three other songs they performed), and we fully intend to post that slice of improvisational stage magic on YouTube and on our website in the near future for everyone to enjoy. 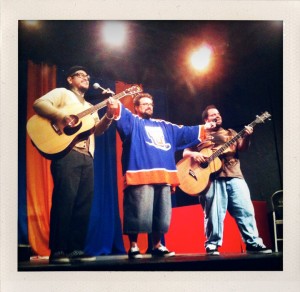 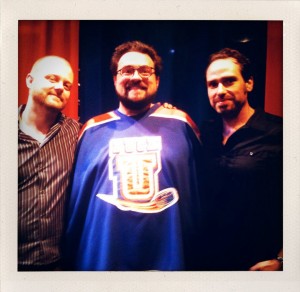 The following day, Matt Walsh (and his wife Kerri) treated us to John Williams’s annual performance at the Hollywood Bowl, and what a perfect day to end the trip! We could see the Ford Amphitheater (site of our Los Angeles Film Festival screening) in the distance, and I got the chills before the show even started. Matt kept telling me that every true Star Wars fan had to experience this at least once; and now that I’ve seen the show, I understand exactly what he meant. 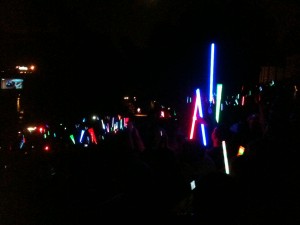 Lightsabers in the night.

The program, ranging from themes to Sunset Boulevard, Jaws and Psycho to Raiders and Superman, was capped off by several popular pieces from the Star Wars Saga. Hundreds of lightsabers suddenly lit up the darkened auditorium, and started moving to the rhythm of the music. The Imperial March encore, if you can imagine it, was nothing short of spectacular. 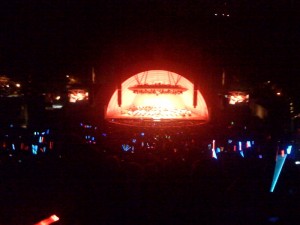 The Imperial March finale at the Hollywood Bowl.

Not everyone came for Star Wars, of course; but, as Matt put it, people came armed with their lightsabers to watch a classical concert primarily featuring songs from other movies. There were no whips there, no Norman Bates costumes. It wasn’t about Star Wars, but the spirit of the saga (The Force, if you will) permeated the entire evening, and all 17,376 of us felt its energy. It was unmistakable and inescapable. And that, right there, is the amazing legacy of George Lucas and his once perfect team of collaborators, who graced us with a strip of celluloid that I’ll argue any day is far, far more than just a movie.