The amazing story of Luke and the rebel forces is more than enough to satisfy all of our Star Wars film needs. If we wanted more, we had the books. We had toys, we had movies, we had the Christmas Special to ignore; life was good. We even had Muppet Star Wars.

But then someone at the Ranch thought, “Hey, if we make more Star Wars movies, we’ll make more money!” and the whole damn thing came spiraling down. With so many great books and comics to draw upon for inspiration, this should have been an easy task, but somewhere it failed during execution. While there are plenty of reasons the movies were…less than ideal, shall we say, here are the top 5 reasons the prequels sucked.

What? What the hell is a midi-chlorian? Well, let’s see what George has to say:

“Midi-chlorians are a loose depiction of mitochondria, which are necessary components for cells to divide.”

Thanks for clearing that up.

It seems George decided that because Star Wars is science fiction, the force needed a scientific reason behind it. Hey George, you were wrong. The Force was an effective plot device specifically because it brought mysticism to a world that was pure science. As any magician knows, once you explain how the trick works, the magic is gone. “May the Midi-chlorians be with you.” Doesn’t quite roll off the tongue, does it?

Oh, and does anyone say “May the Force be with you,” in the prequels? I didn’t hear it.

Wow, this is a subject that could be explored all day. Basically, the problem is this: The original movies had a very simple plot. The rebel forces are overthrowing the evil empire, and some kid from a backwater planet accidentally becomes the great hero of the rebellion. Easy to follow, and still plenty entertaining.

The prequels? Not so much. Watching any of those movies is like watching C-Span coverage of a Senate debate cut with 10 minute scenes of lightsaber fights. I still have no idea what’s going on half the time in those movies. I know the plot for Star Wars had a big political background, but it was in the background. Where it should have stayed.

Reason 3 – The Realism is Gone

In the originals, the worlds and settings of the movies looked real. Part of that is because they actually were real, but part of it is the attention to detail. Everything in the first three movies looked like it had existed prior to the movies. The Millenium Falcon is a heap and looks like it’s three more hyper-space jumps from permanent retirement in a Detroit junkyard. Yoda’s home is messier than the swamp it’s located in. The cantina looks like a dusty bar in Nevada somewhere.

But apparently before the Empire took over, everyone was a clean freak and washed and waxed their starships every week. There is nothing realistic about it. Everything is so…pretty. It’s not how things are in real life, and for movies that are prequels to ones that got it right the first time, it’s a bit disappointing.

Reason 2 – Forced Re-Edits of the Originals

Once the prequels were done, George felt that to maintain continuity throughout the series, he would go back in and re-edit the originals. Yet again.

Why, George? Why? Why couldn’t you just leave the originals be?

He put the actors from the prequels into the original trilogy. Now at the end of The Return of the Jedi, we don’t see a jovial Sebastian Shaw relaxing with Yoda and Obi Wan, we see Hayden Christensen.
Was he even born when the originals were made? I’m no closet fan of Sebastian Shaw, but it’s his face that I think of when I picture an unmasked Darth Vader. Hayden Christensen is not Darth Vader. And for me, he never will be. Many other prequel actors were inserted into the originals as well.

Of course, the insertion of a Gungan (celebration scene, at the end of Jedi) that is most idiotic leads me to… 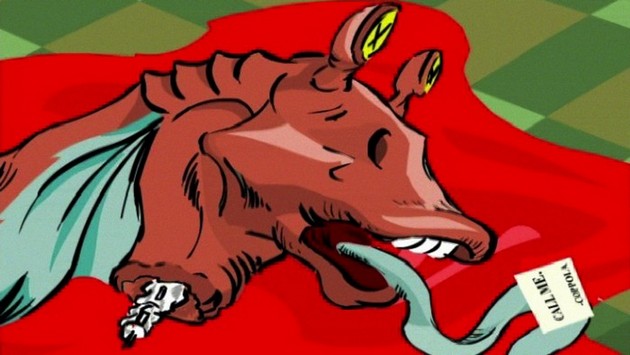 Yeah, you knew this was coming. Is there really anything I need to say past “Meeza”? I don’t think so.

The best scene with Jar-Jar was in Robot Chicken when Vader throws him out an airlock.

And there you have it, folks. Those are our top five reasons the prequels suck. Is it any wonder we made The People vs. George Lucas? Somebody needs to be held accountable for this travesty.

Why do YOU think they suck? Or do you?