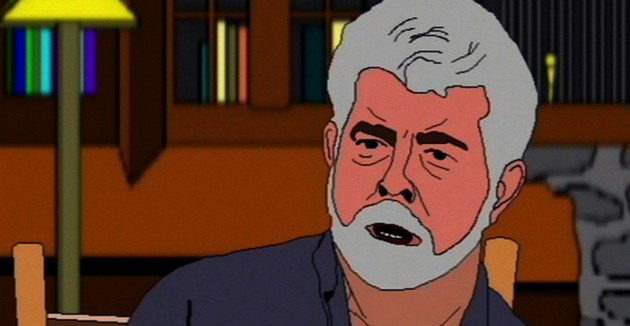 First of all, allow me to tell you how much I appreciate everything you’ve done to advance the film industry. Your innovations in storytelling and the advancements in special effects your movies helped usher in have left an indelible mark on the industry as we know it. Not to mention the franchises that you created that left their mark on me; namely, Star Wars and Indiana Jones. Many a fond hour of both my youth and adulthood have been lost in the worlds those movies created.

I was thrilled when you re-released Star Wars in theaters in the 90’s. Less so when I saw the edits, but I still saw each one multiple times over. I was just thrilled to see Darth Vader on the big screen again. That easily negated badly rendered escapees from Jurassic Park being present in A New Hope.

When I first heard of The Phantom Menace, it was like all my dreams had come true. Finally, a Star Wars movie for MY generation. Pre-release photos of Darth Maul made me so excited, I almost lost bladder control.

And then the big day came. I waited in line for 12 hours to be the first to see it. Granted, I lived in a backwater town that had barely heard of Star Wars, and consequently, there was no line for 11 and three quarters of those hours, but it seemed appropriate at the time. And then the STAR WARS THEME began to play, and the intro text began to crawl, and the first official Star Wars movie in like 16 years was beginning!

I refused to see Attack of the Clones in theatres on moral grounds. Fool me once shame on you; fool me twice, shame on me and all that jazz. I eventually saw it on DVD and was glad my hard earned money went to other, more interesting pursuits. Like car insurance. You turned Yoda into a frog. Really, George? He was, what, 900 years old when he died? But a mere 20 years or so before his death, he was a super gymnastic, lighsaber wielding, ninja frog?

I was on vacation when the final travesty appeared in theatres, and while I was reluctant to go, my friends pleaded and the promise of seeing Darth Vader on the big screen one final time certainly did appeal to me. So I went.

I laughed, I cried, but not at the times you wanted me to. At first I laughed because it was so bad, then I cried for the same reason. Look what you had done to my beloved Star Wars. And the ten seconds of Darth Vader couldn’t overshadow this mess. I lost hope, and there is no new hope on the horizon. When you announced Indiana Jones and the Kingdom of the Crystal Skull, I didn’t even care anymore.

So while you were my childhood hero, I’m sorry to say that I’m moving on. I hear the Lord of the Rings is nice.