As you all are probably aware, George Lucas plans to release all three of the good Star Wars movies and the prequels on Blu-ray in September. Taking a page from LotR, the Star Wars Saga collection also contains three discs full of over 30 hours of bonus materials and never before seen footage. This sounds great, right? Well, not so much. 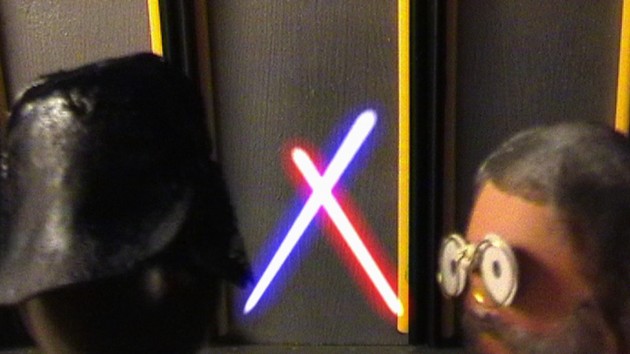 While it will undoubtedly look fantastic on Blu-ray, good ol’ Uncle George yet again leaves his most devoted long term fans in the cold. Is it going to have a remastered un-edited version of the original trilogy? Hell no.

No, we are yet again forced to buy George’s “visionary masterpiece” that pretty much does nothing except aggravate people who know how the movie is supposed to be. WTF? I already have this version! I bought it when they released the unedited version with it in 2008. A version which is possibly of worse quality than my VHS tapes.

On Amazon, there is a little war being waged in the reviews section, and it’s pretty clearly divided between 1 star and 5. The people giving it 5 stars can’t see what the problem is. So this next part is mainly for them.

Here’s the issue. The people who want the unedited version remastered are the vanguard. We are the ones who came first. We are the ones who bought all of George’s toys, and models, and lunchboxes and now spend small fortunes for limited edition Millenium Falcon “Extraordinaire” promos from Toys “R”Us. If not for the original fans, Star Wars would not be here right now. We took Star Wars to heart and made it a part of us.

Then George Lucas came and changed what we loved so much. And it’s now not the same movie. No, you might not care if Han shot first or not, but that little detail speaks volumes about Han’s character. If he didn’t shoot first, then it was self-defense. But if he did, then it makes you realize that Han isn’t exactly a nice guy. He’s an outlaw. It shades his personality.

And that’s why it matters to us. If Leonardo Da Vinci came back to life and said “Hey, the Mona Lisa’s smile wasn’t supposed to be so demure” and then he gave her a big grin, that wouldn’t be okay with most people. And that’s what George Lucas did. He gave the Mona Lisa a big dopey smile.

George Lucas is ignoring the very people who made Star Wars famous and kept the spark alive between RotJ and TPM. We are his most faithful and loyal devotees, and how does he reward our belief and trust in him?

By refusing to give us the movie we actually love.

Here’s an idea, George. Instead of 30 hours of garbage I’ve probably already seen, how about giving us the uncut trilogy. You had to have it remastered before you started messing with it. It’s sitting in a closet somewhere and you won’t let us have it? It’s 6 measly hours. You could fit them all on one Blu-ray disc!

I know it won’t happen. But I can hope. Maybe, just maybe, when he does the 3D versions, he’ll release the originals with them. I doubt it. But as long as we still remember the glory of the originals, they’ll never truly die.