“Prisoner transfer from cell block 1138.” For many of us, that was the first reference to THX 1138 we’d heard. Now, everyone knows it’s a reference to George Lucas’ first full length film, but did you watch it? If so, I hope it was before 2004 when George decided to play with his computer and redo a number of scenes with CGI.

Long Ago, Before Star Wars

Many of George Lucas’ fans have seen THX 1138, and maybe a few of you even like it. It’s a tale of a dystopian future where everyone lives underground, has a name made up of letters and numbers, android cops rule the streets, and people are forced to consume mind altering drugs. And oh yeah, sex is forbidden. Until LUH 3417 makes THX 1138 stop drinking the community Kool-Aid and they try to find somewhere a little less big brother like to live.

The movie was a flop, to say the least, but after the success of Star Wars, George Lucas released it again. And it flopped again. Even Star Wars can’t perform miracles. But it lives on as a cult classic, and has a pretty loyal following, if a relatively small one. Compared to say, Star Wars.

But proving yet again that some things just can’t be left alone, George Lucas went back in and edited it for a DVD Director’s Cut in 2004. And as expected from the Ranch, it’s the only official version available.

However, that being said, most of the edits were more or less minor. Most. It wouldn’t be George Lucas if he didn’t use his super-computer to redo entire scenes or add some new ones. To be fair, some of the changes aren’t bad. The scene where everything is going to hell in a hand basket looks a lot better than it did. And of course, some of the changes will just make your brain hurt trying to figure out his motivation until you get distracted by something easier to understand like “What is the answer to life, the universe and everything?” (Hint: It’s 42.)

And really, it wouldn’t even be as bad a tragedy as his edits of the OT (shudder) if not for the fact he also rearranged a few things and it ALTERS THE STORY!
It’s not an overly drastic alteration. No more drastic than if, say, Chewbacca, Luke and Han all went to preschool together. Yeah, it’s like that. And even if that is a bad analogy (feel free to provide a better one in the comments), it still doesn’t change the fact that some things are sacrosanct. Like the plot.

If not for the plot changes, these edits don’t actually detract from the movie, like in the OT, and in some rare instances, actually add something to it. So maybe George is learning after all. He just isn’t a very quick student. 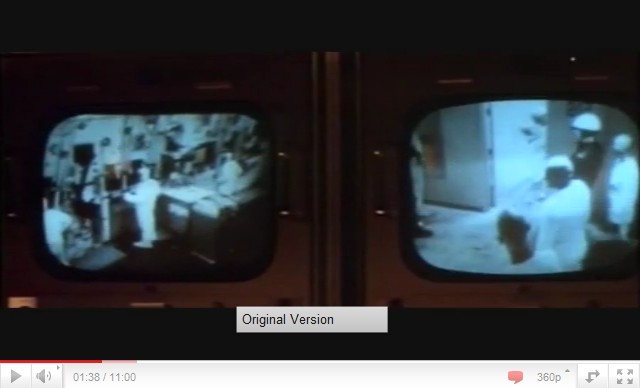 If you’re a fan of THX 1138, tell us what you think of George’s decision to not leave well enough alone. Also tell us WHY you like it. We’re curious.

And don’t forget to hit us up on Facebook and Twitter for all the stuff that doesn’t make it to the blog!